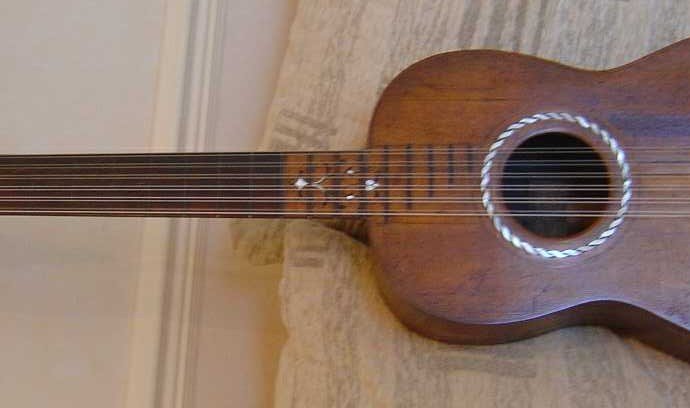 Despite the familiarity of the guitar today, it is in fact one of the earliest known instruments for the performance of both 'classical' and popular folk music, and guitar-like instruments have been in existence in numerous cultures throughout the world for more than five thousand years. It is portable, and capable of producing harmony as well as single-line melody. It is a good 'personal' instrument, yet it combines easily with others and with other instruments as indeed this CD illustrates.

The word guitar was brought into English as an adaptation of the Spanish word guitarra, which was, in turn, derived from the Greek kithara. Tracing the roots of the word further back into linguistic history, it seems to have been a combination of the Indo-European stem guit, meaning music, and the root tar meaning chord or string. The root tar is actually common to a number of languages, and can also be found in the word sitar, also a stringed musical instrument. Although the spelling and pronunciation differs between languages, these key elements are present in most words for guitar throughout history.

The earliest instruments that the modern eye and ear would recognize as a normal acoustic guitar date from about five hundred years ago, in the late Medieval or early Renaissance periods. Prior to this time, stringed instruments were in use throughout the world, but these early instruments are known primarily from visual depictions, not from the continued existence of music written for them. The majority of these depictions show simple stringed instruments, often lacking some of the parts that define a modern guitar. A number of these instruments have more in common with the lute than the guitar.

During the Middle Ages the guitar became a popular and widespread instrument of making music. The earlier popularity of the lute cleared the way for the introduction of the guitar into courtly life, with musicians and bards using three, four and five string guitar instruments to accompany their performances of poetry and singing.

The Renaissance and Baroque periods in particular were significant times for the guitar. There were several different types of classical-style guitars used in this era, and regional differences were common. In Italy, the vihuela and gittern were common models the gittern being similar in design to a small guitar with four strings, whilst the vihuela was a small classical guitar with twelve paired strings. The vihuela was also popular in Spain during the same period, and later migrated to Mexico and gained popularity in the twentieth century. The Baroque period guitar also resembled instruments used today, being slightly smaller in construction but still maintaining a five-string technique. The strings and frets were usually made from gut and the wood was generally lighter than that used today. The overall sound was somewhat softer.