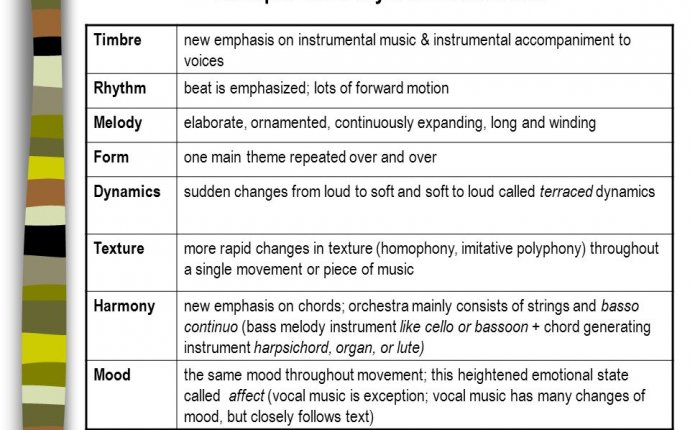 RHYTHM: Energetic, driving rhythms were frequently used during the Baroque period. Short, melodic and rhythmic phrases were commonplace, including the basso ostinato, a melody set over a repeated bass pattern. Meters such as 2, 3, 4 and 6 were typical, tempos were faster and slower than earlier periods, and the tempo would often slow towards the end of a piece.

MELODY: Major and minor melodies were used, and emotion was frequently expressed through melodic devices such as dissonant intervals. Melodic range during the Baroque era expanded from earlier periods, and techniques such as sequence and imitation were used in constructing melodies. Ornamentation was frequently used, including improvisation. Expressive tools such as dynamics were generally either loud or soft, and gradual increases in dynamics were seldom found.

HARMONY: Major and minor scales were generally used as the basis for the tonal centers of pieces. Cadences at the end of sections were strong, and harmonic movement often included modulations and harmonic sequences (repetition of a series of chords at a higher or lower pitch).

*Although this online string class is provided free of charge, all rights are reserved and this content is protected by international copyright law. It is illegal to copy, post or publish this content in any form, and displaying any of this material on other websites, blogs or feeds is prohibited. Permission is given for individual users to print pages from this website for their personal, non-commercial use.