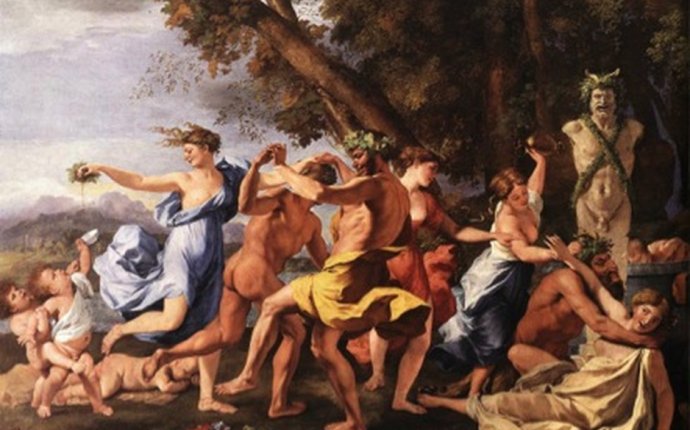 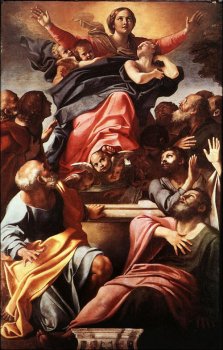 The Baroque period began during the early 17th century in Italy and lasted over a century in some parts of Europe. As a style, Baroque artwork combines dramatic compositions, beautiful details, and emotionally charged subject matter to give viewers as intense a visual experience as possible.

Baroque murals and paintings are often found in churches and cathedrals throughout Italy and the rest of Europe, mostly because the Roman Catholic Church of the 17th century knew that this style of art could be used to promote the church and give an impression of power and authority. 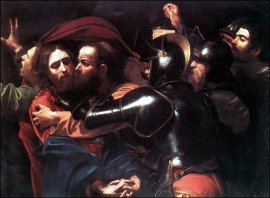 The Church commissioned thousands of Baroque pieces like the one above, entitled Assumption of the Virgin Mary, expressly for that purpose, using them to stir the emotion of the masses while depicting religious themes and ideals.

Early Baroque artists included Caravaggio, a painter who influenced the Baroque style through his use of chiaroscuro and intense realism, and Annibale Carracci, who was known more for his frescoes than his oil paintings.

Caravaggio’s painting, The Taking of the Christ, shows the two signature elements of his style—extreme lights and darks with expressively realistic faces and gestures. 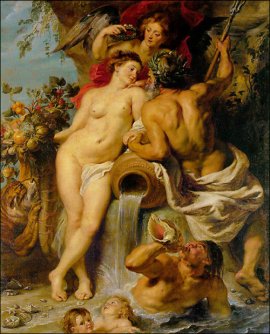 His work is a little less grandiose than later Baroque art, but the emotion, movement, and drama is certainly there.

Peter Paul Rubens, on the other hand, created very grandiose works of art, and was perhaps the most successful and famous Baroque painters of his time, painting for kings and emperors of several countries as well as the Church all throughout Europe.

Here’s one of Rubens’ more mythical paintings (probably not commissioned by the Church) entitled The Union of Earth and Water.

Rubens shows off his skill at arranging several figures in a beautiful swirling composition while perfectly depicting each element of the painting—flowers, fruits, cloth, and flesh.

The Baroque art movement extended far beyond painting, of course, into architecture, sculpture, and music. Eventually Baroque art and architecture became more ornate and embellished, until Rococo and Neo-classicism replaced it in the 18th century.