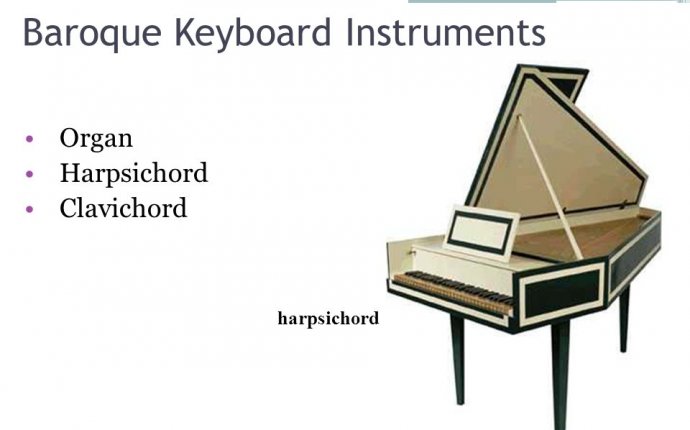 The pipe organ was among the first of the keyboard instruments during the Baroque period. It produces notes by allowing air to flow through reeds called pipes, causing a somewhat 'tooty' sound. Organs were very popular in church music, and was often viewed as an instrument of praise. Baroque composers, however, took the instrument very seriously and professional musicians were thought of as very accomplished. Famous organ composers include Johann Sebastian Bach, Nicolaus Bruhns and Johann Pachelbel.

The harpsichord is a baroque instrument which plucks a string rather than hammering it, and in this way produces a brash 'twang' compared to a piano's gentle 'plink.' However, it was the most popular instrument during the baroque era, and indeed many composers wrote their greatest works upon the harpsichord. It is also often used as an accompaniment with string ensembles. While the demand for harpsichords is much less compared to that of pianos', many ensembles employ it for the true 'baroque feel.' Famous baroque composers include Johann Sebastian Bach, Antonio Vivaldi and Georg Phillip Telemann.

The pianoforte (Italian: soft, loud) is possibly the most well-known and commonly used keyboard instrument in the world. It differs from the harpsichord in the respect that the notes are able to be played with varying degrees of volume. This revolutionised musical history and allowed composers many new possibilities within their works which were impossible with the harpsichord. The piano also has three pedals to change the type of sound it produces - the damper pedal, for increased vibration and legato - the middle pedal, for sustaining notes to enable other notes to be played - and the soft pedal, which softens the sound of the notes. The piano is a very popular instrument in western composition as the structure allows the combination of melodies and harmonies on a single keyboard. Famous composers for the piano include Franz Liszt, Frederic Chopin, Wolfgang Amadeus Mozart, and Scott Joplin.