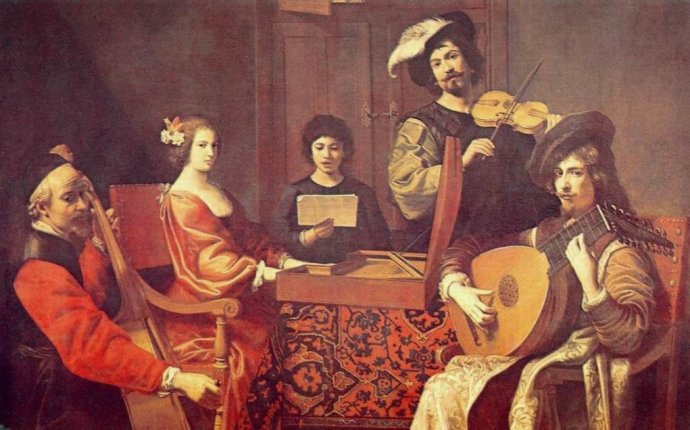 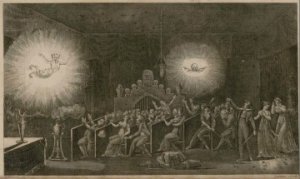 Phantasmagoria was an extremely popular “show” put on for both children and adults in France after the French Revolution, featuring the appearance of ghouls, ghosts, spectres and apparitions.

It was shown in other countries of Europe, but it was by far most popular in France, where so many had lost loved ones during the Terror, and where, apparently, a hunger for contact with the afterlife was strong.

Etienne-Gaspard Robertson (1763 – 1837) was the mastermind behind these productions. His first French exhibition of “Fantasmagorie” was at the Pavillon de l’Echiquier in Paris. He later staged it in the abandoned chapel of a Capuchin monastery near the Palace Vendome. 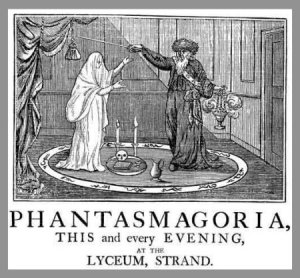 Robertson devised a double-lens lantern on wheels to create his ghostly effect, an invention which is considered the predecessor of the motion-picture camera. (In 1799 he got a patent for this camera, calling it a Fantoscope.)

To create the shadow play, Robertson used smoke, huge sheets of glass, mirrors, and several mobile lanterns. He would project from below the stage, and the hidden movement of a lantern created the illusion of motion. 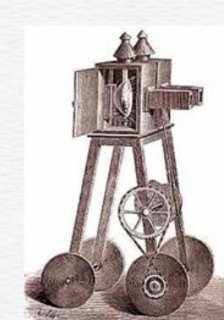 He would change the position of the lens to show a figure growing larger (and apparently closer), yet remaining in sharp focus. He also used rear projection, and projection onto gauze coated with wax, ironed to give a translucent appearance.

The purpose of the show was to terrify the audience—and it succeeded. It could well be considered the forefather of today’s horror movie.

Much of this information is from The History of the Discovery of Cinematography by Paul Burns, which unfortunately is not available on-line at this time.

For a full programme:

Robertson describes some of his phantasmagoria in his

RT @dcq_italia: 😍 #Rome is an open-air museum🏛 At every corner you can find masterpiece! Here #FontanaDelTritone by #Bernini, the creator o…

@Intelligent Browser: Baroque Catholic Church which everyone should visit #SMTDgoa

@Turin_Luca Hmmm...I wouldn't say perfunctory; but perhaps he is a 20th century Baroque composer, in a way?