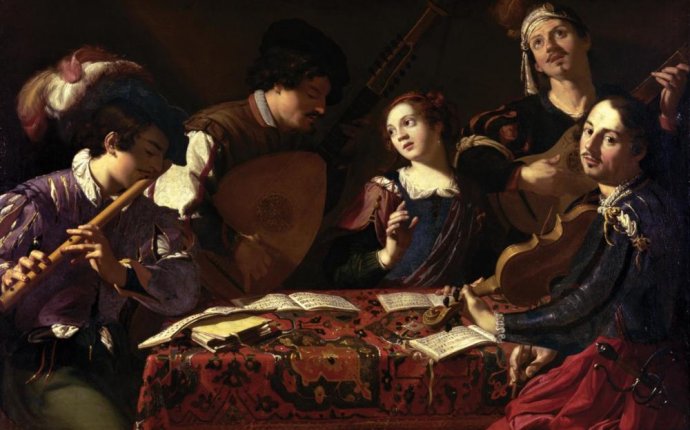 Infusing music of the Baroque with personality and wit, Akademie für Alte Musik Berlin performed its program “Foreign Affairs” on Saturday night at Yardley Hall, presented by the Friends of Chamber Music in partnership with the Johnson County Community College’s Performing Arts Series.

In lesser hands, these selections from the best known composers of their day would be merely ornate museum pieces, but the chamber ensemble’s engaging virtuosity vitalized and humanized the works. The music was clearly fun for them, and the musicians’ enjoyment made it fun for the audience, too.

Akademie für Alte Musik Berlin, specializing in Baroque performance practice on authentic instruments (strings, continuo, winds), was led by concertmaster Bernhard Forck, though the musicians all looked to each other to maintain cohesion for the conductorless ensemble. The program featured a selection of nationalistic dance styles and the group’s wind players.

Georg Philipp Telemann’s Overture-Suite in B flat Major, “Les Nations, ” started out in typical fashion, a striding, stately opening statement contrasting to a lively treatment in the overture and minuets. Forck turned then to the audience and announced the next title, “The Turkish People, ” a galloping change in tonality, with rasping chords and quick runs, to a few chuckles. More laughter met the tolling bassoon at the beginning of a “Les Moscovites, ” cello and bass filling in the solemn intoning of the Russian bells, while “Les Portugais modernes” had a playfully competitive attitude between the string sections.

Johann Sebastian Bach’s Brandenburg Concerto no.4 featured Anna Fusak and Xenia Löffler on recorders and Forck on solo violin. The warm, dove-like tone of the recorders was all but covered by the ensemble during the Allegro, though later the solo moments were more prominent, especially the violin’s impressive extended passage in the Presto.

They changed recorders for oboes in Georg Frideric Handel’s Suite from “Almira, ” the period instruments with a mellower tone than a modern option. Amidst the energetic and technically impressive movements, the gorgeous Sarabande featured theorbo player Michele Pasotti with the ensemble’s quiet, fervent accompaniment.

In Antonio Vivaldi’s Concerto in d minor for two oboes, Löffler and Michael Bosch played with urgency and flair. The Largo, with theorbo and cello as continuo, was captivating and intimate, set against a firecracker final movement so flashy the players were congratulating each other during bows.

Last on the program was Jean-Féry Rebel’s dynamic “Les Caractères de la danse, ” the hearty rhythms and invigorating counterpoint part of the fast-paced exploration of dance styles and a burning conclusion.

Two encores followed the standing ovations: first, a fiery, accented version of Telemann’s “His Attack on the Windmills” from the “Don Quixote” suite, and last, a medley of Americana folk tunes enthusiastically fiddled by the ensemble with a gleeful reeling (including a corny tag from the bass and well-intentioned, if lagging, audience clapping), exemplifying the joyous music-making of the evening.